When rumor turns into gossip, the next thing you know Will Smith’s son Jaden is in a secret clubhouse meeting with Snoop Dogg’s teenage sons Corde and Cordell, hatching a master plan to become the next rap sensations. 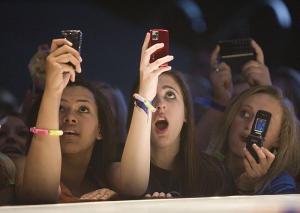 Here are a few predictions for the band if they actually decide to go public with their funky fresh music trio:

1. They will call themselves the Legal Dreamers and conquer the music world with soft love rhymes and jazz infused hip-hop.

2. A performance at the Emerald Square Mall will be canceled after a few hundred fans get trampled on the way to the front of the stage to fist pump along to the hit single, “Double Down=Heartburn Sexy Love,” from their debut album, Twice Around the Corner and Back.

3. Tensions will run high on tour when it is apparent that eleven year-old Jaden’s Nickelodeon show, Back in Class Benson!, is far more popular than Corde and Cordell’s Disney show Swizzle Sticks and Swisher Sweets.

4. With both famous fathers’ in managerial positions the band takes top billing at the 2011 Kid’s Choice Awards. Lil Bow Wow and his new group, The Crew Cut Kidz, are bumped from their scheduled appearance on the slimy show.

5. With the release of their second album called Trigger Heat, the boys take on edgier personas. All three get tattoos that resemble their individuality. A serpent coiling around the head of a Medusa fits perfectly on the bicep of Jaden, while matching Buddhas holding a bong on each of the Doggy brothers is a testament to the only religion they have ever known.

6. After failing to reach the Top 40 with their latest single “Trouble Without Faith”, Corde and Cordell turn their attention to reality television stardom. They join the Hanson brothers, the Jonas Brothers, and the living members of the first High School Musical on a MTV program titled ‘The Best Years Are Behind Us’.

7. Upset over the sudden split of the band, Jaden acts out and begins filming a remake of White Men can’t Jump with Zach Efron.

8. With no contracts of any kind on the horizon all three of the young men take an indefinite hiatus from the industry that spawned them and focus on more reality-based activities.

This entry was posted on July 16, 2010 by wordgossip in All the Funny Things.