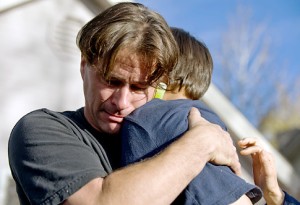 Back in October, a Colorado father of three told his youngest son Falcon to hide in an empty box in the attic for upwards of six hours. Meanwhile, the savvy father inflated and released a Jiffy Pop style hot air balloon into the sky. As the tiny boy hid in solitude, Daddy and Mama Heene whooped the media into a frenzy by alerting authorities that Falcon had boarded the balloon and was sailing solo above the Rockies.

In a desperate attempt to safely bring the boy down from the clouds, a captivated nation pulled together by sending and responding to prayer e-mails from all over the heartland. When the flying balloon machine was finally shot to the ground by law enforcement there was no sign of beloved Falcon.

As his brothers and mother shrilly yelled for him to come home, the dedicated boy remained hidden in the attic until his father gave the secret knock, which consisted of three solid broom taps upon the kitchen ceiling.

After six unnerving hours, Falcon was finally reunited with his oddball family in the game room as he descended the attic stairs. In the days following his return home, the Heene family went on national television to recount the thrill ride that was their child’s disappearance. Two days into the endless stream of media coverage, a fed up Falcon spilled the beans on his spotlight seeking father on live television. Two interviews later, Falcon vomited in Meredith Vieira’s lap in an attempt to swiftly wrap up the segment.

Even though Mr. Heene put his family’s reputation on the line in the hopes of gaining reality television stardom, his 90 day sentence seems excessive considering Snooki from Jersey Shore killed Britney Murphy. In this open-ended plea, I wish and pray for the quick release of husband, father, and hoax failure, Richard Heene. We love you, come home safe. 90 days is too long for a prankster to spend in jail.

This entry was posted on January 11, 2010 by wordgossip in All the Funny Things.