The Back Up Plan

There are many things advertised on television these days that are cause for mild concern. Usually it is a horrible fashion flaw body blanket or a tiny blender that converts upwards of 7lbs of bacon into fruit juice that is only acknowledged with a slight roll of the eyes or a silly snicker. Then there is the advertisement for The Back Up. Although the design of the contraption is literally a metal rod with two large hooks, it is where the rod resides and what it holds that is absolutely mind-blowing. 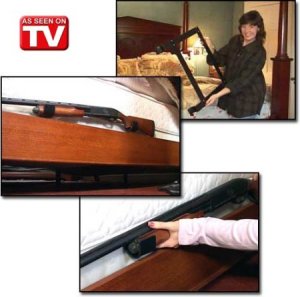 The Back Up is a bedside shotgun holder. I am the most patriotic person around and this is the most outrageous thing I have ever seen. Let the people bear arms, but let us be reasonable about it.

After watching a frumpy mom casually install the device on her Rent-A-Room bed frame then place the loaded Winchester inches from her pillow, smiling from ear to ear the whole while, I soon sensed she was a decoy. A lousy decoy.

What kind of person would be compelled to purchase this high-powered, disaster waiting to happen, in reach of children weapon display? Two groups quickly came to mind. Drug dealers and grandparents. Is it not unnerving to think that there are countless confused, erratic, sleep deprived/sleep walking coke dealers and grandparents in homes across the country just waiting for the perfect time to unload on an unsuspecting visitor?

So what if I am wrong and the Back Up is something the common man would have in his home as an extra safety measure, it is still the most dangerous bedroom accessory in the history of the 2 for $19.99 deal. Can you imagine two gun racks on one bed? At one point, when the decoy throws a blanket over the side of the bed, comfortably concealing the gun’s resting place, I nearly jumped out of my Snuggie in disgust. What they do not show you is the footage of Timmy toddler running to his parent’s bedside after a scary dream, only to stumble on the Back Up first, suddenly sending mommy to be with the big guy in the sky.

Drug dealers who are startled from sleep are 35 times more likely to reach for the closest weapon and aimlessly fire in the dark than any other REM stage snoozer, while 76% of grandparents who have easy access to a gun will fire it at any passing shadow on the sidewalk. These are staggering statistics that cannot be ignored. Don’t get me wrong folks, guns are the bomb dot-com. There is no greater feeling than shooting up a can of Hominy beans with your friends on the family plot, but guns are not fun unless the gunslinger is safe while wielding the weapon. And let me tell you, there is nothing safe about a disoriented person who has quick access to a loaded shotgun.

This entry was posted on December 16, 2009 by wordgossip in All the Funny Things.